This obelisk is now difficult to read, but you can still make out the list of names. 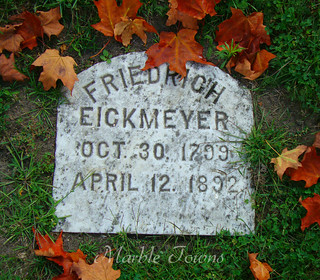 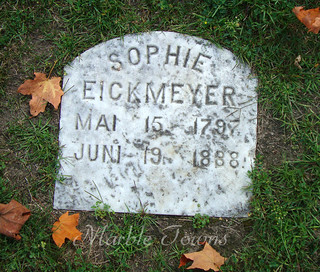 Evergreen Cemetery, Red Wing, MN.
The first thing I did when I was looking for more information about this man was to look up what all of those abbreviations meant.   I could figure out Private, Battery A, but wanted to know what the rest was.  On http://forums.military.com/, I found more information, as well as in this document by William C. Gaines: 577 would be the Division, AAA was “Antiaircraft Artillery,” AW = “Automatic weapons”, BN is “Battalion,” CAC = “Coastal Artillery Corps (the original branch of anti-aircraft artillery).”

Looking on Ancestry.com, I found a Eugene Winters in the 1940 census, living in Wabasha, MN (which isn’t too far from Red Wing).  His age is 28, and his occupation is listed as being a truck driver for a road company, and the census record shows he has a wife, Alberta, and one son, Dean, and two daughters, Marion and Arlene.  I also saw that there were other families with the same last name, which included Harold Winters.  Harold Winters is buried near Eugene, and I will do a post on him at a later date.  From this census record, it looks like Harold would have been a nephew (?) of Eugene’s.  Going backwards, the 1930 census shows Eugene as single, living in Wabasha, the third child of John and Matilda Winters (both hailing originally from Sweden).   I did find the marriage record for Eugene and Alberta, apparently from Decorah, Iowa.  That record shows Eugene, aged 23 and a farmer by occupation, married Alberta Peterson, aged 17.  Both were showing a residence of Weaver, Minnesota (which makes me wonder about why this record is from Decorah, Iowa).

Unfortunately, I wasn’t able to find any more information.   And, sadly, I did find the obituary of Arlene Winters, who passed away on March 17, 2013.

I am always interested in learning more, both about service in war, and about anyone that I am posting about — please feel free to leave a comment!

(many thanks to JPfromTN on this forum, who posted very helpful information!) 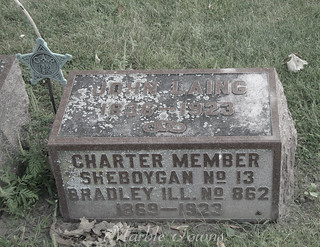 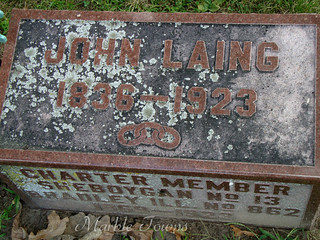 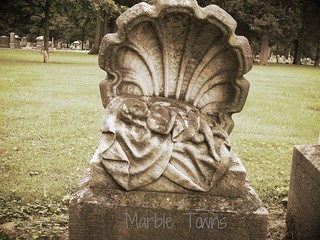 While visiting the Wildwood Cemetery in Sheboygan, WI, we came across this marker, which also had a 2-sided sign posted near it. 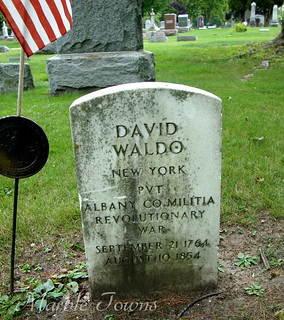 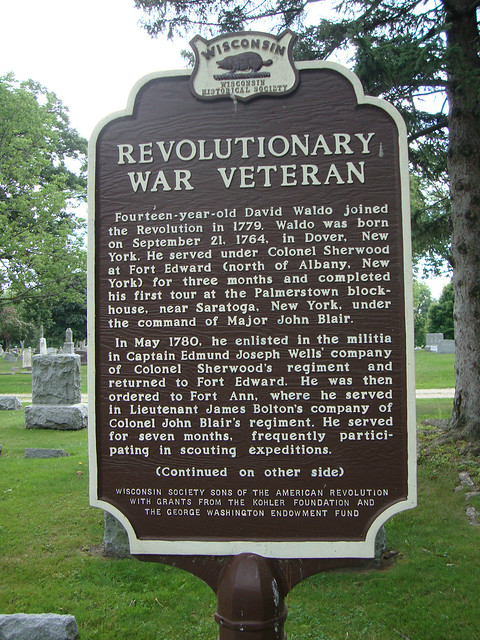 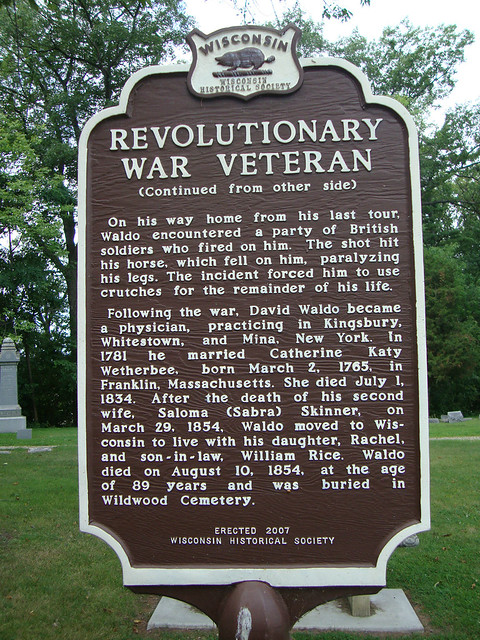 Looking for more information, I found the Wisconsin Society Sons of the American Revolution, which included a whole section on Revolutionary War graves.  It was great to have this sign next to the marker (and have so much information on this man).

Our visit to the Oakwood Cemetery in Red Wing, MN allowed us to see some kinds of markers that we hadn’t seen before: ceramic.   Red Wing, MN has deposits of clay beds (which led to industries and the founding of Red Wing pottery in 1877).  When we were visiting the Red Wing Pottery Museum, we learned a lot about the history of the company, but also saw examples of pieces that were made by the workers. 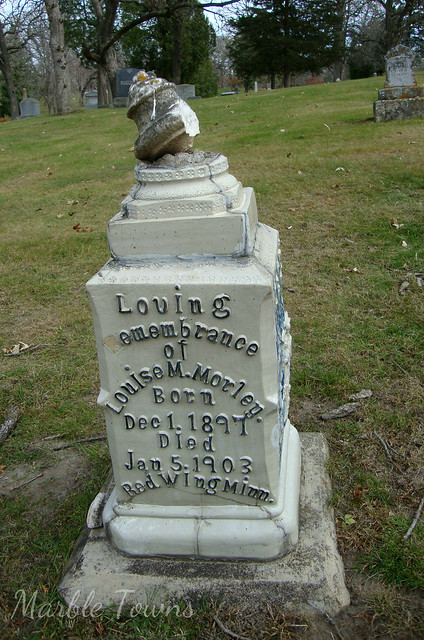 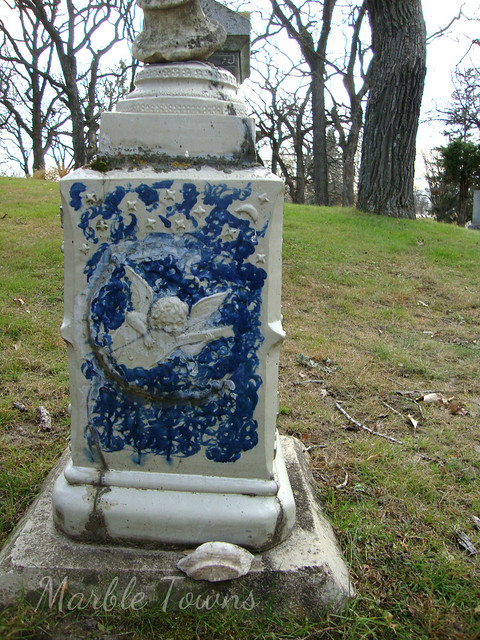 All four sides have decoration and information: 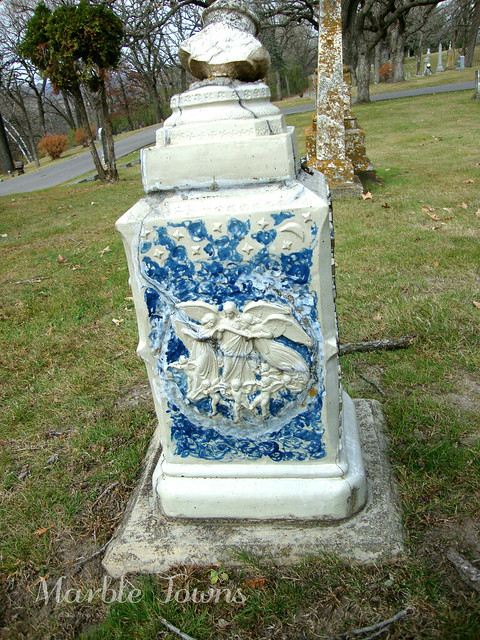 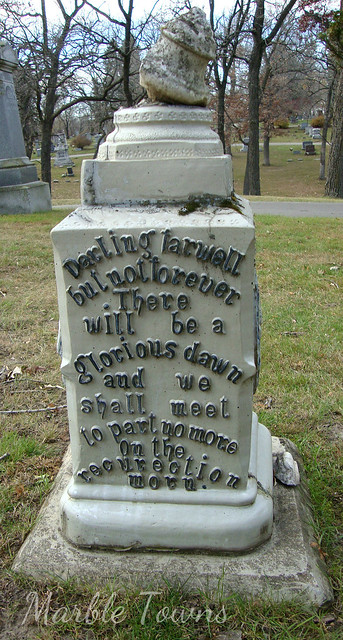 And her information on Find a Grave is pretty extensive (a big Thank You to Kym for posting this!):

As so many young children born in the late 1800’s and early 1900’s, little Louise died of disease. She never got to experience a full life but she is never forgotten. She brought joy to the family that knew her and touches the hearts of those who did not know her.  Her grave marker was made of clay in the pottery factory, most likely by her father William. Her grave marker originaly had a large cross on the top of it with a picture of Jesus where the cross intersects. A truly amazing head stone and personal tribute to little Louise.

Inscription on the back of her stone:
Darling farwell
but not forever.
There will be a
glorious dawn
and we
shall meet
to part no more
On the
recurection
morn.

The notation about her father, William, making the marker makes a lot of sense, as many workers made pieces for themselves.  This marker is beautiful, and has obviously stood the test of time well.  Very touching. This photo, on Ancestry.com, shows mother Mary with the three girls.